Sportwear is booming. Not only veteran sports brands like Nike, Adidas or the latest Under Armour, that raises passions in America, are driving this new trend of “wellness” and healthy life. The biggest fashion channels are also launching their sport lines: Inditex has launched “Zara Sport” just a few weeks ago, following the strategy of H&M, Mango and Desigual, who had already launched their collections.

Valencia Football Club, one of the top Spanish soccer clubs, has also managed to promote itself within this trend. Just over a year ago, he had closed some stores in Valencia to stay with an official store and opening a flagship store in the heart of the city, opposite the Town Hall. The two-story megastore offers a wide range of clothing for soccer and running of the Adidas brand, official partner right now, and shows an impressive technological wizardry. 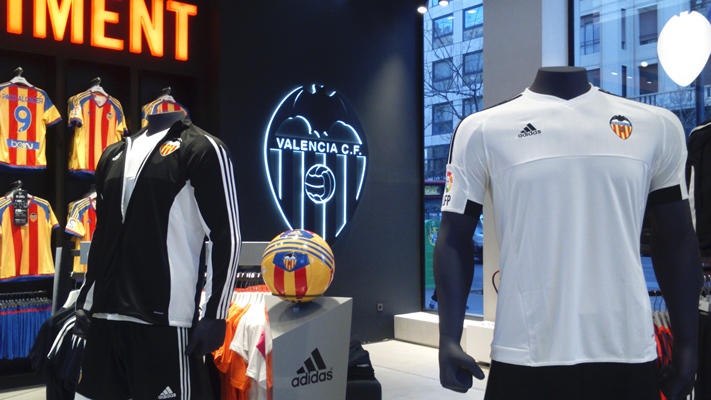 As you enter through the front door we find a visual mural of large dimensions, whose right the main area with shirts of different designs, and left the main box, next to another gateway, and the area running and other clothing and accessories. It is notable the Smart use of main staircase transit space to present very brightly footwear models.

Many visual and interactive displays spread throughout the store: large vertical displays on columns, the horizontal wall adjacent the area of accessories on the second floor emitting simultaneous signals, and smaller tv displays placed among the large windows, showing every single available place communicates the brand image. 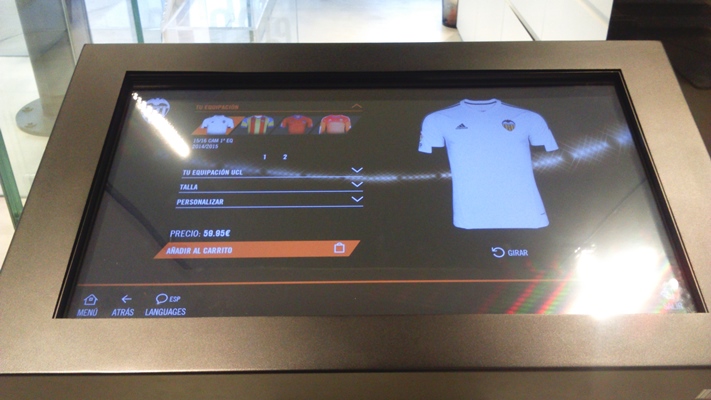 The biggest innovation of the megastore is the “VCF Custom Lab”, an area of customization on the top floor: an area with machines that let you customize garments to suit the buyer preferences. Orders are placed at diferent touch screens: vertical panels placed by between shelves of the store, horizontal panels placed opposite the lab, and also at large tables with touch screens in the middle of the second floor.

Once the order is placed the client receives a code, and in 5 to 10 minutes, depending on the number of buyers at the time, the code is scanned on the screen tracking orders placed in front of a giant yellow robotic arm which, when the signal is received, it is responsible for locating the package and give it to you. Actually, the presence of the robot is very shocking, because it does not stop moving vigorously, even if no orders in preparation, particularly for kids. 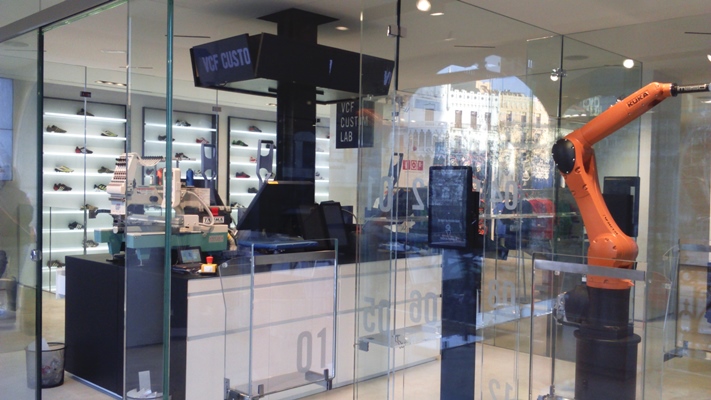 Through the large windows of background observed the wonderful city hall building, which helps to combine outer space and interior, modernity and antiquity, innovation and tradition. Exquisite blend of styles and subliminal messages. 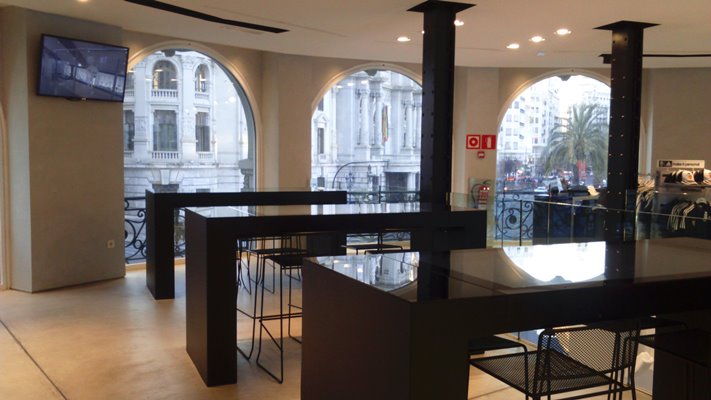 A new surprise awaits us when searching the changing room. In a basement, which is accessed by a staircase that resembles the presence of the football field, you get to an area that emulates the locker room of Valencia football stadium. One really feels more in touch with the sport when tested garments, not missing the presence of the players, whose images appear almost natural size. 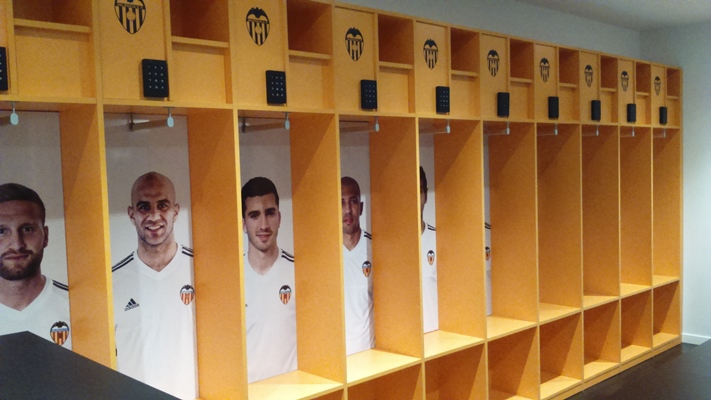 Summing up, this is a tremendous store, which is right now looking for new sponsor. According to the club announced only a few days ago, Valencia CF is negotiating with several sports brands to replace Adidas and become the provider of the official garments from the 2017-2018 season on. As Peter Draper pointed out, marketing director, Valencia asks a seven million euros fee per season, plus variable income depending on sales. In addition, the new provider should take care of the new signs of this Megastore, currently labeled by Adidas. As indicated by a local newspaper, current fees are far from the figures that other teams in Spanish Liga are handled. At the top are, not a surprise, Real Madrid (Adidas) and Barcelona (Nike), receiving 40 and 35 million euros per season each, but also other clubs like Atletico Madrid, Sevilla or Athletic Club of Bilbao exceed Valencia in this concept’s revenue.

The battle comes hard. If you want to come to visit this shop in Valencia before any changes, StoreTours Program, by America Retail, organizes your trip. Contact us here.